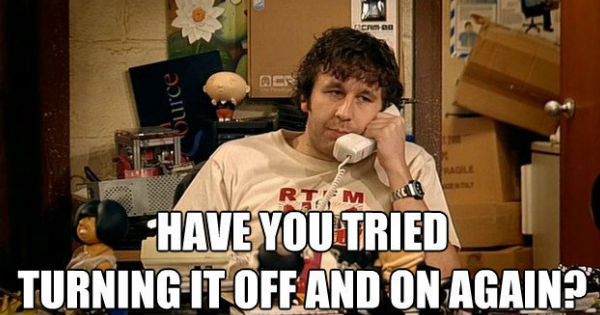 “Sir, I’m timed on each call. I have to resolve issues in a timely…” once again he tries to intercept and re-take control of the situation, but with no success. In his frustration, William grabs a yellow sharpened pencil from his desk drawer and starts to lightly beat down on his penitentiary green work desk.

He starts to fiddle and play with the white eraser until it finally gives way and breaks, only to bounce off, hit his dark red camp shirt, and begin to roll under his desk. As he pushes his office chair back and starts to crawl on the filthy snack sprinkled burgundy carpet, dirtying the knee areas of his loose fitting dark blue tech pocket pants, his troubled caller continues on.

The line cut off abruptly and a nasty surprise startled William while he was on all fours. On the other side of his chair’s wheels, he saw a pair of ugly brown flat business shoes worn by corporate women aggressively trying to climb up the ladder of success to break through the glass ceiling. Then after slamming the top of his head on the underside of his desk his reaction to this was to groan a very loud, “Owwww!”

“Butler! What are you doing goofing off with the callers? I was monitoring that phone call. Get back to work or I’m writing you up again,” Will’s supervisor, Ashley Trai, barked angrily and scowled at him. She was dressed in a very conservative khaki skirt that reached all the way down from her flat bony waist to her bony ankles. Her business shirt was the same beige color and resembled someone you’d see on a Fox News church special. Her pasty pale face looked like the product of backwoods inbreeding with her beady eyes almost completely crossed below a thick yellowish uni-brow that assisted in scowling at him behind her black horned rim glasses.

As he was getting up and back into his chair, he brushed off his knees and noticed some orange gum stuck to the bottom of his lace less black dress shoes. He focused on removing it instead of explaining anything to Ashley because she never listens to him anyway. Plus, in an hour it’s time for him to go home. He looks at his desk phone and sees that the ringer light is flashing. Another caller is waiting for assistance. He hopes that it’s the last of the day. He quickly answers it to avoid any interaction with Ashley, and lucky for him she ended up getting called away by another office worker.

“William Butler, how may I help you?”

“I’m trying to change my background can you help me?” the female caller asked. Her voice resembled the kind of girl that liked to collect rare and boring Midwestern quilts.

“Sure. I need you to right-click on the desktop.”

“Ok, right-click again. Do you see a pop-up menu?”

“Ok, mam. Can you tell me what you have done up until this point?”

Will couldn’t take it anymore. He took his headset off, and dropped it. He put his hands on his head, and his elbows on his desk. He paused and took a couple of breaths. He started to reminisce about working at his last job for a Native American Boarding School where he helped to reinvigorate and modernize the entire Network Infrastructure.

He wasn’t just a Help Desk Technician, which is a respectable position in and of itself, he was the entire dept’s Director. He had people working for him and he only had to answer to the Federal agency above him. Not this amateurish pecking winch who keeps coming around and cackling at him.

He tried to keep his patience by reminding himself that most users really don’t know what a computer’s virtual desktop is. He went through the explanation of a desktop and how to change the background. It was excruciating for him, but he completed the call.

Right after he hung up with the last caller, the loud and noisy sounds of a pair of partially soiled yellowish safety glasses, a headband with a light, and a white painter’s mask startled William before he turned his head to see one of his fellow help desk coworkers, Jack Knoff, dropping them onto his desk.

“Ashley wanted me to give these to you. It’s your turn now butt head,” his raspy voice barked. He was blonde, blue eyed, and muscular. His facial features resembled a cross between a pig and an alligator. His circle beard and bushy mustache didn’t help his unattractiveness. Underneath his tight gray stretchy shirt and tight blue Jeggings pants, his skin was sporadically smothered with sunburns, acne, pox marks, and overcompensating super macho tattoos of weapons he had no skills in using. He seemed to be one or two inches shorter than William’s six feet height and he smelled a little bit like rotten flowers and a dirty wet feline.

“What are you talking about? I just did it this morning,” William brings his attention back to his computer screen pointing to his Outlook Calendar confirming his declaration, then he continues, “It’s actually your turn now.” He turns to him and Jack is nowhere to be found.

Certitude belongs exclusively to those who only own one encyclopedia. View All Posts